Reiner Füllmich: (04:20:39)
Man, we have, we have come, I mean a year, a year ago when we first started Our Corona investigative committee, had anybody told me what we’re talking about right now. I really would have told them to take their pills and go see a doctor, but it is now reality. On the one hand, it’s pretty monstrous. It’s frightening. And on the other hand, it looks as though more and more people are waking up. And this is we’re coming to this thing is coming to a head, not in a few months it’s happening right now. It’s, it’s definitely never been about health. It’s always been from the very start it’s been about. Does this destruction of the economy shifting money to up to the elites, to the very rich. And it’s definitely about eugenics and genocide. And I think it’s about time that we call a spade a spade. What do you think?

Reiner Füllmich: (04:33:39)
We’ll have to take a very close look at that. This is complete new news to us. We, I don’t think any of us have heard of this before.

Vera Sharav: (04:33:46)
That’s the w that’s really the only reason I said, okay, I’ll come to that because I didn’t want, you know, but this is terribly important. When you have real direct continuity like that, and the money is there, I’m a little bit disagreed with but not much power is the main thing. The control is the main thing, but they know that the money isn’t just for them, for living and all that we couldn’t possibly even imagine of course, but having so much money, just think how much they can bribe. And I do believe that every single head upstate who has not been assassinated that is, has been both bribed and threatened. That’s why every, every country is in one way or, you know, to a lesser or more degree prisoner. We’re all kind of prisoners of whoever is calling the shots.

Reiner Füllmich: (04:35:00)
Now, the thing is they bribed the leaders of these countries. It’s, it’s not the people. They cannot be bribed and they cannot be threatened.

Vera Sharav: (04:35:09)
No, of course not. They, they bribed the leaders. They brought the various institutions, all the medical institutions. That’s an long time kind of standing thing. I mean, at the time it must be about 20 years ago when the American medical association sold its membership list to pharmaceutical companies. That was the beginning so that the pharmaceuticals have direct access to doctors prescribing numbers. So it’s been a long time that this has been turned into essentially now it’s yeah, it’s a killing tool. It’s a murder, medical murder. They use it you know, you go after the medical establishment the way I do. But I feel it’s terribly important. It’s not that, you know, particularly against doctors, no individual doctors who regard the Hippocratic oath is, you know, relevant are the people that, you know, that we trust, but it’s been totally compromised infiltrated and turned into an army of murders.

Reiner Füllmich: (04:36:32):
And that’s been happening ever since they, the Rockefellers at all turned their oil fortunes into the pharmaceutical industry at the beginning of the last century. And this has been going on for way too long. That’s why we have to stop it now.

Vera Sharav: (04:36:50):
I know. And you know, and I’m sure you know that yes, you discussed before I heard, as far as the percentage of people who do and aren’t getting along and, are just the, the silent majority, we’ve always called them that. And they are, of course, in the United States, we also have the red states and they’re not quite silent, but they’re watching carefully and they don’t go along with any other.

Vera Sharav (04:47:46):
So that it really won’t be again. I just want to add one more group that you should, along with the others, the, uh, Jefferson, uh, Whitney, and that’s the Pirbright Institute of London. Okay. They’re closely aligned with gates and with Boehringer and Merck. Everybody’s involved, you know, you notice and the world economic forum, I mean, they’re sort of all direct. It all kind of gut gets back to world economic forum. No. They’re all members of it. And they have, now you may have that from David Martin. Yeah, the patents, because the Pirbright has a patent, two 16 for the vaccine.

Vera Sharav (04:49:04):
They’re all interconnected. You know, I mean, this is not a secret, as Ilana said, a lot of what we know is because they themselves have documented it. Yeah. The plan is really very clear.

Vera Sharav (04:49:33):
But that’s it exactly. If people understood that If people understood, I mean, well, I guess that’s why my memory from way back cut really kicked up to the forefront where it hadn’t been, it had been dormant for many years, but when I think about it really that at six years old, I defied authority and I was nothing. I had no, nothing, but whatever it was in me, in me, I was fighting for my life as I understood it. And I, in fact I did, but it was really, and why, because I assessed this nice family as somebody I could trust to take care of me. I knew I needed somebody to take care of me and it wasn’t going to be institutions or whoever gives orders. Somehow I knew that, I don’t know this is instinctive really.

Vera Sharav (04:50:36):
But that’s Just it, the idea of annihilating, people’s compassion, people’s ability to understand one human being to another that’s really what matters. That’s what humans, that’s what we’re our DNA actually tells us to do. And they’re trying to simply eradicate that and replace it with, with gadgets, you know, with tech gadgets, everyone is not, you don’t need opium. You have to tech gadget. It’s really very addictive. It’s very addictive. You, you know, teenagers never see anyone looking at them. Cell phones. In other words, virtual reality has replaced reality In real time.

Reiner Füllmich (04:51:33):
And we were going to have to recapture our real reality. And we will, we’re in the process of doing this, I think right now.

Viviane Fischer (04:51:40):
And I think we’re going to win because reality is much more fun and much more sexy than virtual reality.

Vera Sharav (04:51:46):
Absolutly. That’s the other part they want to get rid of you know I mean, that’s not just the procreation, but the process too. They don’t want fun. Yeah, that’s right. It’s inhuman. It’s, anti-human, it’s everything that one should recall from, but this is the part that the general public really has no clue about any mention of any aspect of it is made. They immediately dismiss it as conspiracy theory. I think it’s time for us to lay out the conspiracies instead of pretending that there are no conspiracies, you know, because they’ve managed to do that and language is important.

Vera Sharav (04:53:44):
Yes. That’s I think that’s the only way. And because I think people will listen because they’re really tired of this.

Vera Sharav (04:53:55):
I think, I think at least those who speak straight, they’re the quickest to get it. The ones that are hard to get are the ones with a couple of PhDs and MTS. They’re really they’ll they’ll ask once. I can’t believe it, but it’s kicking back. They more than anyone, they don’t dare look sideways. They don’t dare, I guess, because they suspect maybe it’s, they’re not really on firm ground, so they don’t want to shake It up.

Reiner Füllmich (04:54:27):
And that’s a, that’s a consequence of our it’s not ours, but our system of education, This was done on purpose. Yes,

Vera Sharav (04:54:38):
Absolutely. It cannot be otherwise that millions of people are walking around as if there’s zombies.

Reiner Füllmich (04:54:54):
Absolutely not. This is important and we’ll, we will definitely be in touch. Okay. See you later, 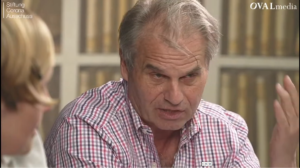